In light of the property slowdown in Iskandar, the latest indicative RM1,000 psf launch price for the latest launch Southern Marina at Puteri Harbour, Iskandar had some investors gasping for oxygen.

Because The Puteri Cove registered sluggish sales, the Southern Marina developers did not want to suffer the same fate.

As mentioned before, it’s hard to access caveat data of property transactions in Iskandar. One usually has to rely on an array of developer’s indicative price list to get a sense of where the price is going.

Interestingly enough, I managed to dig out an old price list of Encorp Marina. I had been interested to buy a marina/sea fronting unit back in 2012 but as the better units were blocked for sale, leaving only the ones at the lower floors, I walked away. A quick look at the price list showed that prices for the better units were going for about RM1,250 psf.  Hence, prices have indeed corrected since 2012. 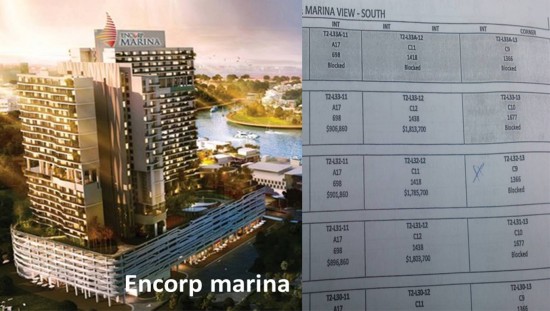 Country Gardens which launched 9,600 units for sale in Danga bay still has about 60% of inventory stuck. Guangzhou R&F Properties, which has launched 3,000 units for sale in Tanjung Puteri recently had its credit rating downgraded to BB-, as it is not expected to hit its sales target.

For those who have bought into Iskandar, be mindful of the latest pricing development there.  Most projects won’t be completed until 2016/2017 and already some developers have issued delay notice to buyers. If you haven’t already profited by flipping your Iskandar property, be prepared to hold on for an extended period. 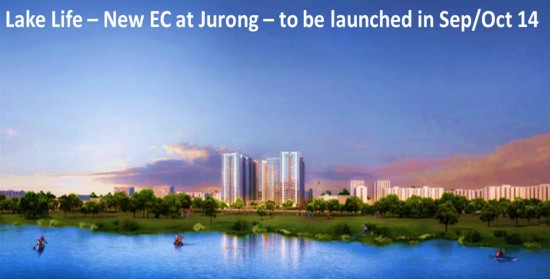 Now that the government has announced plans for a revamped, revitalized Jurong, the latest Executive Condominium (EC) to hit the Jurong area, Lake Life is riding on the positive sentiment to launch sometime in Sep/Oct 14

One Empower Advisory member asked, “What is the highest possible price that an EC could launch at?”

Well, in theory, there is no limit. If Lake Life could launch at $10,000 psf knowing that that it can sellout all its units at that price to Singaporeans, it will. However, because it is constrained by HDB rules such as the household income ceiling of $12,000 and restriction of sale to foreigners, Lake Life cannot be priced too crazily. It has to consider if the market, made up of mostly Singapore households can afford it.

When we went about a backward calculation to derive a maximum psf based mainly on the income and loan restriction imposed by the government, we made a reasonable assumption that the typical family unit to buy an EC is not very cash-rich and just have enough cash and cpf to service the 20% downpayment and stamp duty. We are also mindful not to stretch the loan to 30 years and use an unreasonably low mortgage interest rate. Also, ECs are not like your typical private condos for they have selling restrictions. This has a downward effect on EC pricing.

If you look at the table below, you’ll see that we have derived a MAX selling price of $1,012 psf. 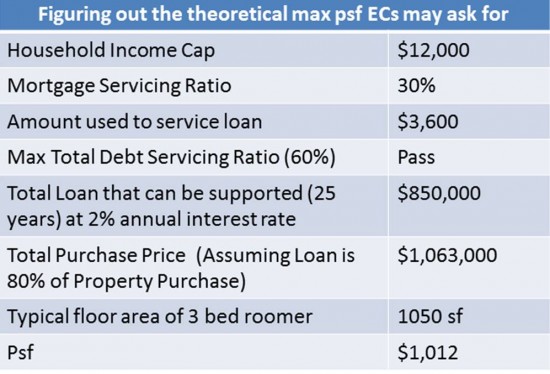 Don’t fret! That’s just the maximum psf we calculated. We are confident it won’t hit this level because ECs have to cater too to households who are not quite at the fringe of the income ceiling.

Since households earning income above $10,000 are not eligible for brand new HDBs, let’s use the $10,000 mark to re-compute the psf. We get $845 psf as shown in the table below. This is the point that EC developers think the Singapore market can reasonable bear for EC projects. It doesn’t mean however that every unit at Lake Life will clear at $845 psf.

Let’s examine the story from the developer’s end to see if $845 is palatable. The consortium behind Lake Life paid $419 psf per plot ratio for the land. Factor in about $280 psf for construction, finance and marketing cost, we derive a breakeven price of about $699 psf. Selling at $845 psf gives the consortium a 21% profit before the magnifying effects of financial leverage. Is it good enough?

Given the boost of the National Day Rally which covered the transformation of the Jurong Lake district, we suspect the consortium will push for more, perhaps up to $900 psf. If it cannot move as many units as it would like, there is more than enough fat for a price cut.

Is Lake Life a good buy then? That, you would have to ask us =)

Click on Douglas to read his win-win-win approach and see property listings!

Get Your Residential Valuation Report!

Register for our Public Outreach!

Register for our Small Size Classes & be a Member!

Do you have any enquiries?
Enquire More
Alternatively, you may contact us via the following mode: