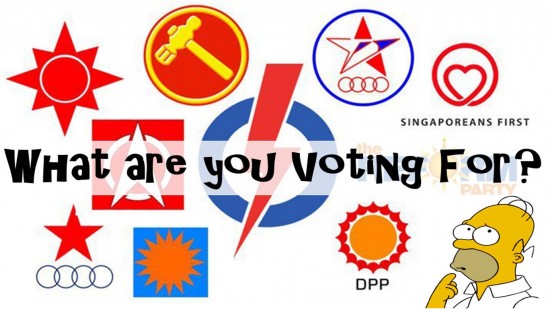 Humans are creatures of habit. Designed this way, it takes something extraordinary to take a normal person out of his comfort zone. Here’s an analogy. If you have a good, cushy job, would you just jump to a competitor company with no track record for an extra $500? What if you join the company, and 6 months after a glitzy welcome party for you, the company folds?

The answer is almost always no.

Whatever your choice, voting for different political parties is not voting for Singapore’s destruction. On the internet, spats have turned nasty with name calling traded among the different camps of supporters. Some facebookers have struck off friends from their list for disagreeing with their choice of political support. I do hope the spats stay and end online and not manifest as physical violence.

This is not a battle of me against you. All of us voters are Singaporeans.

If there were no government, no ruling political party, would Singapore still function? What will happen the very next day?  The civil service will run as usual. The traffic lights will still work. The ERP will continue to deduct from your cash cards.

Not everyone has the same vision for Singapore. Some want Singapore to be a tough warship that can sail through any waters. If some of the crew get sea-sick, they will be given some attention but the ship will not stop at its next port of call for fear a competitor overtakes it. Others want Singapore to be a cruise ship that will give all sea-sick crew full attention and to put anchor for a few days until everyone is good to sail again. There are merits to both visions. Rational folks want to see a balance. The majority of heartlanders want to see that balance.

Should the warship or cruise ship that is Singapore capsize, the wealthy will be affected too. But they can get a lifeboat, more easily than most. And they will be picked up with open arms by passing liners. What about the other passengers?

But these doomsday scenarios won’t take place overnight. It will take a long period of negligence before it happens. Ultimately foreign countries and companies have no loyalty to Singapore when it comes to the crunch. If there is a competent industrial park that springs up in Iskandar with the same quality of workers and infrastructure as Singapore, yet cheaper, foreign MNCs will be tempted to relocate from Singapore for good. It will take many years of negligence by our economic agencies before this happens. But it won’t. Because our Civil Service which overlook our economic agencies won’t let it happen.  That’s why our Ministers do lots of PR work with their overseas counterparts to make sure that personal and nation level ties remain current and relevant. That is also why foreign workers are allowed into Singapore for strategic, besides economic reasons.

So what are we voting for if we can’t vote the civil service that is already doing the bulk of the work?

1) Singaporeans are voting for good policies, that are better implemented and better enforced by the agencies

2) Singaporeans are voting for unreasonable, unfair policies to be removed or recalibrated

6) Singaporeans recognize that individual success and happiness is ultimately our responsibility. But Singaporeans prefer to see themselves collectively competing against the world rather than each other. How’s that for unity?

7) Singaporeans are voting that their reasonable, well substantiated suggestions and counter-proposal matter

No matter, which party they vote for this coming election, Singaporeans are not voting against Singapore.

I have a real life case study

The Build-To-Order (BTO) system is lauded as a responsive system offering flexibility in location and timing for flat buyers. Tender for construction will be called only when most of the apartments in a specific contract have been booked. In reality, it led to a shortage of new flats and genuine couples can miss several chances due to the overwhelming response. Typically, such a couple had to wait a few years (up to 5 years in some cases), hence postponing other plans in life. This was because the government had overbuilt in advance under the previous Registration of Flat System (RFS). After the Asian financial crisis in 2001, HDB was left with about 20,000 unsold flats as buyer dropped out of the queue.

Instead of relooking critically how it could offload the 20,000 unsold flats, HDB decided on a new approach of selling and that is to build new flats under the BTO system only when a good majority of flats in a project are booked. On paper, it was sound. The BTO system would allow HDB to ramp up new flat supply quickly when demand is high. Conversely, when demand is low, HDB will scale back to avoid oversupply.  But it also meant that this system was slow to respond to demand. In reality, you can’t just ramp up and down your supply so smoothly. Singaporeans my age know what happened. HDB flats were underprovided for. Finally, after the unhappiness expressed at GE2011, HDB decided to ramp up new flat supply.

Why did it have to take a decade to realize that the BTO system was not the best way to go about it? Why the knee jerk panic when there were 20,000 orphaned flats? The 20,000 flats that were left unwanted could have been easily opened up to singles to buy. No one would have complained since the singles would not be depriving of a deserving family nucleus of a flat. At that time, singles were not allowed to buy a flat directly from the HDB at all. Did anyone in the Civil Service float this idea? I was still in NUS then and did not have the chance and influence to debate this to the policy decision makers.

A controversial policy maintained then was that singles cannot buy a flat directly from HDB and enjoy the subsidy. Why? Supposedly for not fulfilling the nation’s interest of marrying and starting families. If that is the case, shouldn’t couples who marry, get their subsidized HDB flat but don’t have children to repopulate Singapore return their unit? It is this kind of unchallenged policy that perplex many Singaporeans. Why is it implied that a single Singaporean who buys a flat directly from HDB stays single? Why is allowing such a single to buy a flat direct from HDB not seen as helping him/her to set up a family easily if he/she finds that match?

Trade-offs are done when you have limited supply to distribute. In that fateful year of 2001, supply was not an issue. It could have been a golden opportunity to revise certain policies. Not for the convenience of disposing 20,000 flats of course. But to comprehensively relook at policies in totality. Not in silos.

Few of us will know the debate behind closed doors regarding the 20,000 flats. But we all know how the BTO system failed to adequately provide enough housing for Singaporeans at a reasonable waiting time.

What would I have done if I were the Housing Minister? Tweak the singles polices to clear excess inventory first. Convince my minister colleagues that unfairly treating singles will not solve our baby woes anyway. If my minister colleagues are not happy that there is no differentiation between singles and non-singles, I’ll propose perhaps a longer Minimum Occupation Period. Don’t simply slap a higher price on them. People get sick treated like that.

Start the BTO system but have the RFS in the background at a reduced scale to cater to unexpected spike in demand. If the BTO is eventually working fabulous, then scrap the RFS or vice versa.  Is it so difficult to think of this and implement it?

Whoever is running Singapore cannot take voters’ understanding for granted. It’s not about pandering to their every wants. People generally have unlimited wants but limited needs.

In my ideal world, there would be no incumbent political party and opposition party. There would be just ONE Singapore party drawing the best ideas regardless of race, language, religion and party affiliation for the best of Singapore.  No one party has the best solution to every problem. Every party has a blindside. Every politician will be selected for integrity, purpose, competence and commitment to Singapore. Compensate them reasonably and give them their due privacy.

But yeah, it only exists in a fantasy world, so let the royal rumble begin!