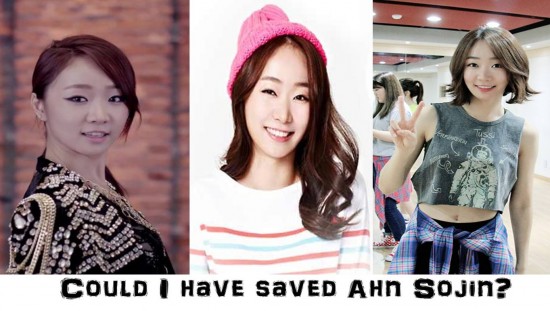 I don’t know her. Never read about her. Never watched her sing and dance.

But something about Ahn Sojin’s untimely death forced a huge sigh out of me. In a country obsessed with plastic surgery and leggy teen pop stars, Sojin was one of many starry-eye Korean teenagers, hoping to be a K-pop idol and bask in the adoration from millions.

Never mind that the Korean pop industry cranks out K-pop girl bands with ruthless efficiency, keeping members strictly in line and replacing individuals when their popularity dipped or threatened the band’s popularity with their ‘unauthorized” love life and other distractions. The companies that operate such girl bands know that since their replacements looked similar anyway, disgruntled fans will soon warm to them.

22 years old Sojin lived and breathed, wanting to be K-pop idol. She had said that participating in the Kara Project (a reality TV show to find a new member for K-pop girl group Kara ) was her last shot at becoming a pop star, as she was considered overaged, by youth obsessed K-pop girl band standards.

She had been trying for a long time to break into the K-pop scene since signing on 5 years ago as a trainee with artiste management company, DSP media, going for vigorous singing and dancing lessons. Alas, she lost in the finals to Heo Youngji, 20, who became Kara’s newest member. A heavier blow came 6 months later, when her trainee contract with DSP media was terminated. Did they consider her a lost cause? An investment down the drain?

Depressed, Sojin leapt to her death from the 10th floor of her apartment on the 24th Feb 2015.

Could there have been a Plan B she could look forward to? Was an all or nothing approach to life the way to push oneself?

I wish I had the chance to speak to Sojin when she was down in the rut, disillusioned at how her efforts had come to naught. I wish I could have coached her to chart a Plan B, where her talents could be put to satisfactory use. I wished she could have paused at the ledge and thought of all the wonderful possibilities she could apply herself to, beyond being a Kara member.