So you want to own a private jet in Singapore?

If so, you’ll be joining about 6 other Singaporeans who own private jets in Singapore.  Here’s a fun fact. The price tag of a brand new private jet ranges between S$5.5m (HondaJet – 4 basic seater) to S$60 m (Gulfstream 550 – 20 luxury seater). 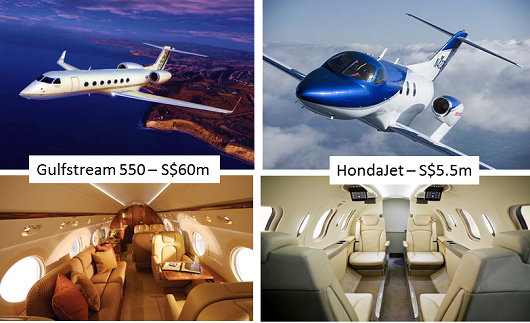 The annual cost of maintaining one averages S$625,000.  And where does it go to?  The cost of hiring pilots (At least 2 for a larger private jet), engaging a maintenance engineering team, routine overseas maintenance, as well as fuel, over-flyer, landing and parking charges.

But that’s not the point of this article. Apparently, the folks who own these jets in Singapore are unhappy that Seletar Airport where their jets are parked, sells them jet fuel at S$1.52/l compared to S$1.05 at Changi Airport and S$1.11 in Senai Airport (Johor).

You may think, wah why these Singaporean tycoons so cheapo, their fuel cost cheaper than my petrol price!! Let’s do the maths. With private jet fuel tank ranging from 4000 to 23,000l, a full tank would cost them between S$6000 to S$35,000, compared to our humble S$100 full tank at a Shell station.

The point is, even these tycoons who have many zeros in their bank account gripe about such cost differential. They have build up their wealth by sniffing out good deals and never leaving too much on the table. The same goes for fuel price. Leaving too much on the table knowing that there are cheaper jet fuel alternatives nearby makes them peeved, to the extent that they are making their displeasure known to the Singapore authorities through private jet operators. Of course, there are vested interest at play as these private jets could be leased for chartering when not in use by their owners and the high jet fuel cost eats into the margin.

Like these tycoons, be savvy. Accumulating wealth is not just about how much you earn. How much you save is equally important!